A summer trip
By Alannah McEwan Alannah recently moved to Melbourne Australia where she plans to work and travel during the next year. Before that she lived in Vienna Austria for two years and spent a summer living in Florence Italy learning Italian. www.inforeignlands.com

I went to Bulgaria because one of my closest friends, who I met while studying in Austria, is from Sofia. She was going home for two weeks in the summer and I and one of our other friends decided to join her. We took an overnight bus from Vienna to Sofia which took fifteen hours and had to stop at the border twice, entering and exiting Serbia as it is not part of the EU. On the way back it took 23 hours because of the long queues at the border. We chose the bus because it was much cheaper than flying, round trips cost only 100 euros. The bus was comfortable and the journey passed by quickly, so if you have some time to spend in Europe I would recommend looking into bus trips to the  Eastern Europe countries. 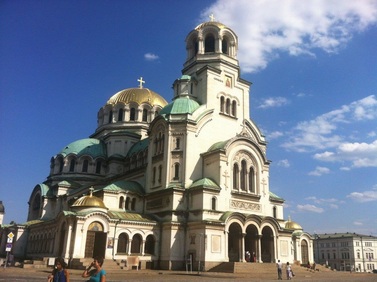 ​It is always nice to go somewhere with a local as they can show you around to the best places and give you tips and advice. I was doubly lucky as not only did I go with one friend from Sofia, but I had another friend ( also who I met studying in Austria) who was also from Sofia and home at the time. So I had two locals to show me around. We went to see all the main sights in the city such as: Alexander Nevski Cathedral, the Ivan Vazov National Theatre, and the Rotunda of St George. The city has a nice underground so it’s easy to get around and also cheap (0.5 Euros for one trip compared to 2.20 Euros in Vienna). While Bulgaria is in the EU they do not use Euros and instead use the Bulgarian lev.

​A great restaurant we went to was called Happy Bar and Grill. The food and drinks were really great, and prices were cheap compared to what you would pay in central and western Europe, the staff were friendly,  and it had a nice location in the centre.

​Another of my favourite places to grab a drink and bite to eat is Laguna. It also has a nice central location, a nice outdoor garden, and is known for its cakes.
I enjoyed Sofia but what really made the trip was the Seven Rila Lakes and the seaside. In order to reach the lakes we drove to the mountain then took the Panichishte Resort cable car. There was a big queue, first to buy the ticket for the cable car (you can also choose to walk up free of charge) and secondly to wait to get onto the cable cars. I think it was  because we went on the weekend and I would therefore recommend going during the week, earlier in the morning. The highest lake is 8200ft above sea level and from this point it is possible to see all seven of the lakes in one amazing panorama. The hike is at a moderate level, with some places being quite steep and I slipped a couple times on loose rocks when climbing back down, so take your time going down.  This was one of my favourite days of the trip and definitely a 'must do' if you like hiking, the outdoors, or breathtaking views (or like me, you enjoy all three). 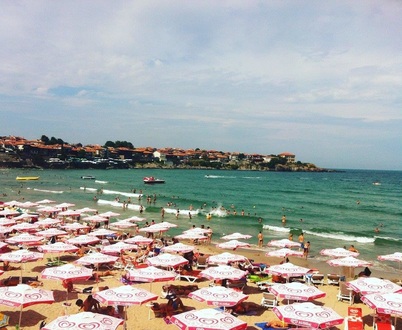 ​One of my next favourite things in Bulgaria was the seaside. We took a bus from Sofia directly to the seaside town of Sozopol.  Sozolpol is an ancient seaside town located on the black sea. It has a beach party atmosphere with a beautiful traditional Bulgarian city a short walk away from the white beaches. I really enjoyed the food, which is generally a mix of Balkan and Mediterranean dishes with many restaurants located along the water so you can have a great view of the sea as you enjoy your food. At night time the city comes alive with bars all along the beaches in full swing. One night we walked along the beach, stopping whenever we heard a song we liked, and danced in the sand. It’s great feeling the cool sand between your toes on a warm night as you dance the night away.  The other night I was there we went to a bar called Tequila – had tequila shots of course, then went for a night swim. There is pretty much everything you could ask for in a beach vacation spot and the prices are great.
​
This is a great place to go if you’re on a budget – and even if you’re not. If you’re planning a trip to Europe and Bulgaria is not on your list I would recommend adding it. The country has a lot to offer from stunning mountains and countryside, to diverse cities and beautiful beaches. One thing to keep in mind is that, in my experience, not a lot of people speak English, which was one of the reasons I was grateful to have local friends around to translate. So you might have to ask a couple of people before you find someone that speaks English but with a bit of determination and maybe some hand gestures I am sure you will manage.

For more information go to http://bulgariatravel.org
Back to Features homepage