​By Solange Hando. Solange is a professional travel journalist and photographer, editor, public speaker and facilitator. She has contributed to National Geographic and Reader's Digest travel books and published features in 96 titles worldwide. She travels widely but her specialist subjects are Bhutan, where she attended the coronation, Nepal and France. She is a member of the British Guild of Travel Writers, Travel Writers UK  and the International Travel Writers Alliance. Her latest book is the Berlitz Guide to Bhutan. She is also the author of, 'Be a Travel Writer, Live your Dreams, Sell your Features' which has been endorsed by Hilary Bradt (founder of the Bradt travel guides) and best selling author Simon Whaley. Search for Solange Hando at http://www.amazon.co.uk
'Keep your legs apart and don't touch the stick, it will move back and forth, ok?'

No problem. When you get the chance to fly in a small aircraft in the co-pilot's seat, you don't argue, do you?

'As long as we keep to Botswana's airspace, we'll be fine. Four countries meet down there, you know, Zambia, Zimbabwe, Namibia and Botswana.'

So up we climb above the enticing Chobe river meandering, peacock blue, across the immense wilderness of its namesake national park in the east of the country. Minutes later buffalos and elephants are mere blots on the landscape stretching from wetlands and savannah to riverine forest, swirling all shades of green, russet and gold. My head goes into a spin, I squint in the blinding sun but I have reached the 7th heaven. 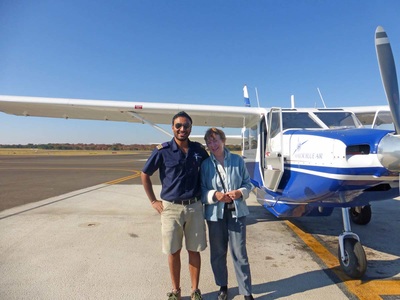 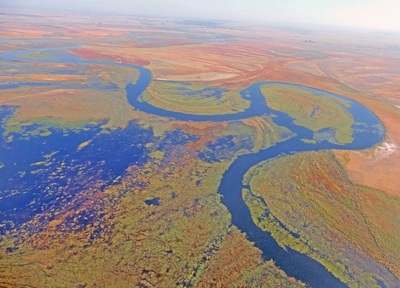 I almost forget the gunshots which had me jump out of bed in the early morning. 'Don't worry, lady, just scaring off the elephants when people walking to work.' The guide's name is Trust and his helper's called Smart so we're in good hands, as long as we keep away from the river bank, especially after dark  when crocodiles are on the hunt.

We spot dozens of them that afternoon, spiky dragon-like creatures speeding downstream, as straight as arrows, or basking nonchalantly at the water's edge, gaping mouths, jaws at breaking point. The tiny boat comes to rest along the bank and mesmerised by one of the sleeping giants, I'm tempted to stretch out my hand and pat him on the back. Then we watch the hippos popping in and out of the water while the baby snuggling up to his mum has the guides in raptures. Never seen one so close in 10 years on the job. 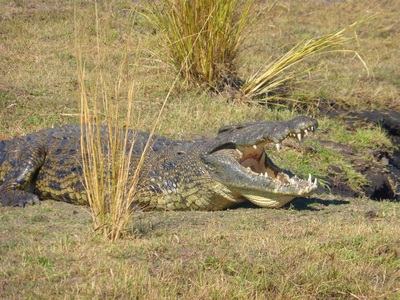 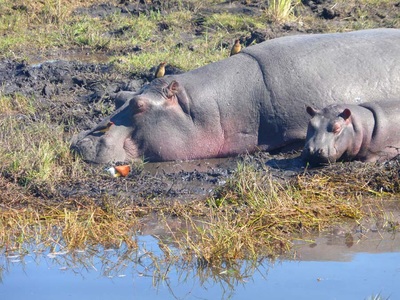 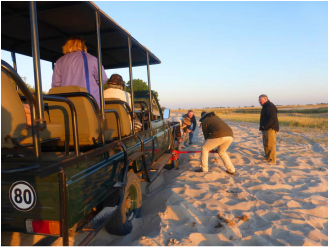 We glide around islands and reeds and luminous lagoons where yellow-billed storks flap their wings to confuse the fish. A buffalo herd, 200 strong, stares from afar and as the sun begins to set, the first elephant dips his foot in the water, in, out, then wades ever so cautiously before taking the plunge and swimming across to the safe haven of Sedudu island. The sun sets flaming red but in the safari lodge, the baboons are still on the prowl, baring their teeth as I hurry past. Ignoring the warthogs foraging on the lawn, I settle for an early night.

5.30 am and we're off, bouncing over the hill on a dusty rollercoaster track. 'Lean to the left, lean to the left...' The jeep rights itself just in time, feet from the water, but the great marabout storks barely bat an eyelid, standing as stiff as a fleet of undertakers. Now the river shimmers like magic, all pink and gold under the vast African sky. Birds begin to stir, hornbills, coucal, sacred ibis, giant kingfisher, just a few of the 460 species in Chobe. A jackal sends the impalas scampering  through the dust while hundreds of guinea fowls as round as footballs peck undisturbed on the sandy shore.

​But what's that? The jeep jerks to a halt, we're stuck. Shovels and planks appear from nowhere, Smart and Trust jump off and the men follow suit to direct operations. The ladies huddle on board with strict instructions to raise the alarm should the need arise. Five, ten, fifteen long minutes and we're on the way, no harm done. We recover at the 'stretch point' with coffee and safari rusks served on the bonnet but I'm still longing to see a lion.
'Maybe this afternoon,' says Trust, 'we'll find one.'

Giraffes, antelopes, monitor lizards, young elephants in pretend fights, they've all turned up for us but where are the lions?

'Up there, look, vultures, that means there's a kill. You lucky.' 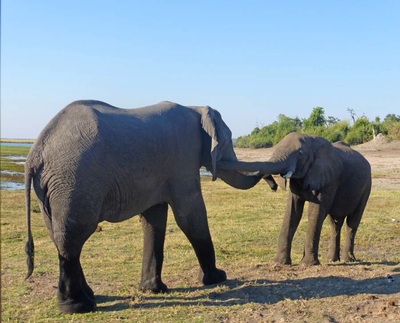 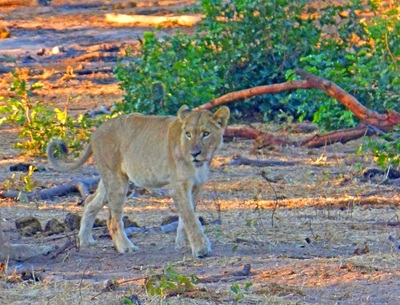 ​​ And so we are: just feet away from a carcass, the lioness sits under a tree, totally relaxed, then she stands, eyes sparkling, tail curling up, and slowly, very slowly, she moves forward. The air is still and in the late afternoon light, we gaze in silence. Up in the trees, the vultures are waiting for their turn.