It's the temples that are the most spectacular

By Mike Quane Mike has been writing about destination travel for over twenty-five years.  His outlets have included The New York Daily News, Newsday, Endless Vacation Magazine, Parents Magazine, Grit, The Portland Press Herald, Telegraph Publications, eturbonews.com, Traveling Magazine of Hong Kong, the in-flight magazines of Singapore and Korean airlines, and many more.  He wrote a weekly travel column for This Week Publications for fifteen years, and a monthly column for LongIsland.com for over a decade.  He is also a senior contributor to TripAdvisor.com.  His favorite subjects have included the Philippines, Ireland, Tahiti, Croatia, Australia, Malaysia, Bangkok, Maine and Virginia.  He has been a frequent delegate to the ASEAN Tourism Forum and is a member of The New York Press Club.  www.michaelquane.contently.com
Shopping and gawking at the nightlife are what draw most visitors to Thailand's capital city. But for me, it was Bangkok's history and architecture that were truly spectacular.

On the ride into the city from the airport, I was initially unimpressed. The high rises, the new mega shopping centers, even the old neighborhood markets were what one expects in most big Asian cities. 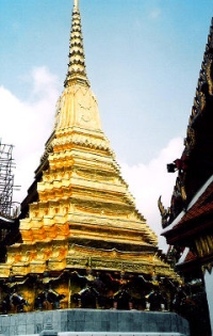 However, the charming traditional Thai welcome at the dazzling Shangri-La Hotel, and the view from my room of the bustling Chao Phraya River with its nonstop ferry traffic, began to make me feel that Bangkok would be something special.

It was my tour to the Grand Palace complex the next morning, given by a guide from the hotel's travel agency, that cemented the fact that Bangkok is unique.

The sprawling Grand Palace complex, established in 1782, houses not only the royal residence, but a number of government buildings and temples as well.

It was the latter that made it a memorable visit. The first sight that enchants is the Upper Terrace, dominated by three spectacular temples built in the Sri Lankan, Thai and Cambodian styles of religious architecture, respectively.

These divergent traditions indicate the reach of the Thai Empire during the reign of King Rama I, founder of the current royal dynasty. The Upper Terrace also contains the Scriptural Library, with its classic facade, and the Royal Pantheon, with its monuments to the various kings. Scattered about are sculptures of elephants, mythical figures and warriors. 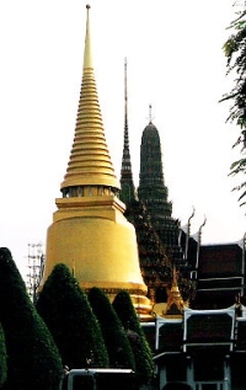 Another fabulous building in the complex is the Royal Monastery of the Emerald Buddha, one of the most revered religious sites in the country.

The Emerald Buddha, actually made of jade, is enshrined on a throne, with numerous other images of the Buddha surrounding it. The spirituality and devotion of the Thai people are demonstrated here, as throngs pray and listen to sermons by Buddhist monks throughout the day.

Though not on the palace grounds, a nearby landmark is not to be missed, the Temple of the Reclining Buddha. The 162-foot figure is awesome, as is the reverential aura of the place, where hundreds of pilgrims line up to light candles and offer coins.

Another of Bangkok's delights is a cruise on the Chao Phraya River and the city's canals, including a visit to the Royal Barge Museum and the fabulous Temple of Dawn.

A surprise highlight was a stop in front of another Buddhist temple, where schools of enormous catfish, protected from fishermen by the local monks, gorge themselves on loaves of bread flung from the boats by the tourists.

A perfect day was topped off with a traditional Thai massage at Chi, the Shangri-La's spa, where relaxation and meditation are about renewal and harmony.

For information on visiting Bangkok, contact the Tourism Authority of Thailand at www.tourismthailand.org
​
For more on Thailand, go to Animal Voluntourismand Flower Festival
Back to Features homepage