and its unrestricted pleasures
By Edward Placidi. Edward Placidi is a freelance travel/food writer and photographer who discovered his passion for exploring the world as a teenager and has gone on to travel ‒ mainly on solo, independent adventures ‒ in 102 countries (so far). He has penned articles for numerous newspapers, magazines and websites. When not traveling he is whipping up delicious dishes inspired by his Tuscan grandmother with as many ingredients as possible coming from his organic vegetable and herb garden.
June 2021:   It was like old times. I was on the road again traveling without a care – no covid entry test, no masks, no quarantine, no restrictions. 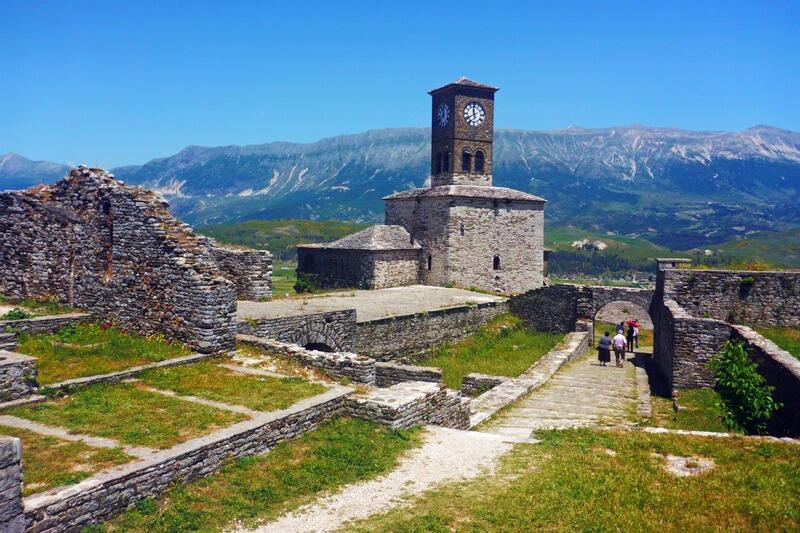 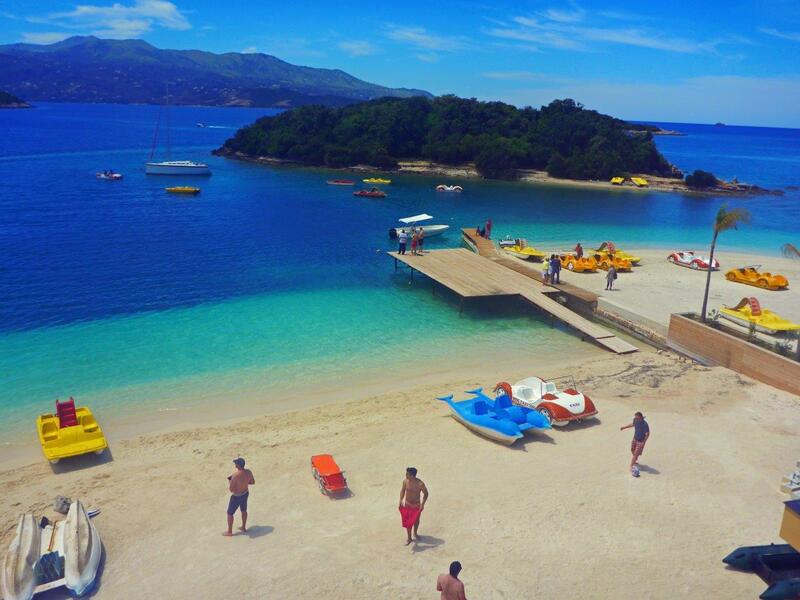 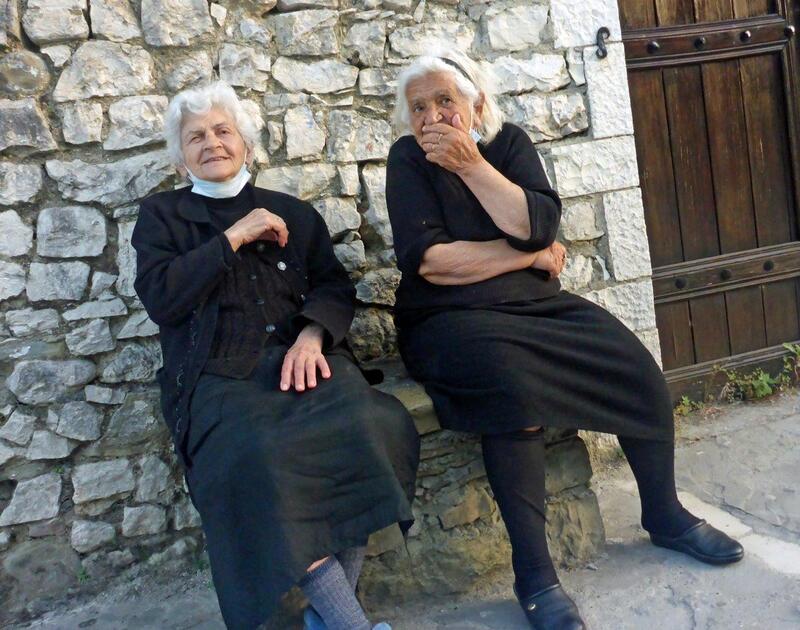 No country is more completely open than Albania, and the people welcomed me with open arms, delighted that visitors are returning. The innate hospitality shone through: It’s one of those countries where asking for directions you are likely to be shown the way personally, taxi drivers don’t just drop you at the station but search for your bus and take you to it, and when they learn your nationality are effusive with compliments and welcomes.

Albania has a dark recent past. A 50-year communist dictatorship ‒ the country closed all those years ‒ was followed by political chaos and civil strife. Over the past 20+ years, however, amid an ongoing building boom and a rush to modernize, the small Balkan nation has made great strides, evolving into an exceptionally safe, enjoyable and affordable destination.

Arguably its greatest tourist asset is its diversity: over several weeks, I hiked in the picture-postcard Albanian Alps, swam in the clear Ionian waters of the burgeoning (some would say already overbuilt) beach resort of Saranda, sailed one of the most beautiful ferry rides in Europe, visited a string of historic towns topped with craggy castles, delved into the relaxed outdoor-café lifestyle of the capital, sampled a cornucopia of traditional dishes not found elsewhere, and experienced three UNESCO World Heritage sites including the ancient ruins of Butrint, the slate-roof Turkish manor houses of Gjirokastra and Berati, the “City of 1000 Windows.”

Here are eight places where the unrestricted pleasures of Albania are most fully enjoyed. 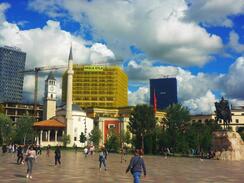 Tirana: The leafy capital exudes the relaxed lifestyle and enthusiastic, forward-looking spirit of the emerging country. The city center ‒ of tree-lined avenues, parks, squares, sidewalk restaurants and ever-ongoing construction juxtaposing historic monuments with modern skyscrapers ‒ encircles massive Skanderbeg Square, named for Albania’s national hero.  It’s the countless outdoor cafes, however, that truly define Tirana ‒ and all of Albania really, because there must be more here per capita than in any other nation. It’s the thing to do here: sit in an open-air café with friends, sipping espresso ‒  the national drink ‒ and wiling away the hours gabbing, people watching and savoring the slower pace of life. 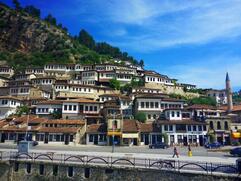 ​Berati: It’s easy to see why Berati is known as ‘The City of  1000 Windows.’ The iconic photo often used to illustrate and promote Albania is of this best preserved Ottoman city in the Balkans, highlighting the 18th-century tile-roof houses with rows of big windows that stack up the hillside. Standing guard over the riverside town is a massive, and magnificent, hilltop castle that started out in the 4th century BC as an Illyrian citadel. Still-occupied, inside is a warren of lanes between stone houses and mosques, churches, cisterns and fortifications in varying states of ruin. With the sundown begins the daily evening promenade where seemingly half the inhabitants stroll along the river gabbing, laughing, eating ice cream and hanging out in outdoor cafes. 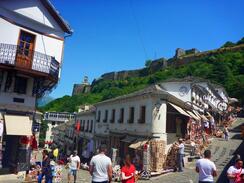 ​Gjirokastra:  Narrow cobbled lanes negotiate steep slopes up to this hilltop town where Turkish pashas once ruled, leaving behind a grand architectural legacy and giving today’s Gjirokastra the moniker of Albania’s prettiest city.  In the small center, the 19th-century houses have been converted into restaurants, cafes and shops. Venture beyond to discover the hauntingly beautiful real Gjirokastra: architecturally completely different than the Ottoman houses of Berati, they have defensively designed lower floors with small windows and narrow entrances, several stories of airy living quarters and slate roofs.  Perched above the city , Gjirokastra castle was once a formidable bastion, with origins dating to the Iron Age;  today outer walls and an 18th-century clock tower stand but little else. The panoramas, however – of valleys, rivers, mountains and patchwork fields ‒ are stupendous. 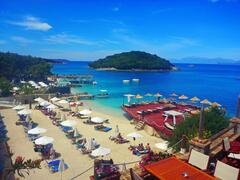 ​Ionian Beach Resorts: The exponential development of Saranda, quickly turning the small seaside city into a major resort on the Ionian Sea, has been stunning. And the neighboring village of Ksamili is now playing catch up. The two are prime examples of how fast once-isolated Albania is coming into its own. In summer, Saranda is a sea of beach-goers and a hub for activities, centering around a long, bustling seafront boardwalk of outdoor cafes, restaurants, boutiques and hotels. Ksamili is more purely focused on sand and sea, known for its beach clubs,  beautiful  water ‒ aquamarine in the shallows near shore and deep blue further out ‒ and a string of small islands to swim out to.

​Butrint:  This UNESCO World Heritage Site is a journey though the history of the region, beginning back in the 8th century BC. And the ancient ruins are truly pleasant to visit because, located on a forested peninsula jutting into a lake by the Straits of Corfu,  you walk under a cool canopy between the sites. Every few minutes, as you emerge into a clearing, a new surprise awaits:  a nearly 3,000-year-old acropolis, a Hellenistic theater, Roman villas and baths, an early Christian basilica and baptistery, a medieval gateway with a carved lintel depicting a lion biting a bull’s neck, a Venetian castle and tower, and more. 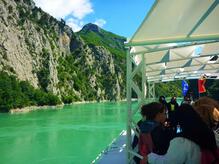 ​Lake Komani:  The lake is only 60 years old, yet the natural beauty is one for the ages. Lake Komani is manmade, created in 1961 as part of a large, successful project to generate sustainable hydroelectric energy. Beyond electricity, it brought an unexpected bonus: stunning landscapes that leave you breathless. Several passenger and car ferries ply Komani, sailing the shimmering sea green waters through submerged canyons and gorges, navigating narrow channels between high, gargantuan walls of rock that loom over the passing boats. Designed by engineers, it became a force of nature ‒ and one of the most  ravishing ferry journeys anywhere. 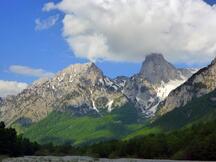 ​Valbona:  To see the most majestic crags and peaks, illuminated by radiant natural light, and hike a range of trails, from forest paths to rocky escarpments, head to this hamlet in the picture-postcard Albanian Alps. Among the world’s most mountainous countries, Albania is more than 70% mountainous terrain ‒ with some of the most dramatic and breathtaking panoramas experienced in Valbona. The guesthouses that dot the valley do it all for visitors, from lodging and food to guides and transportation. The most challenging hike ‒ the  7-8 hour crossing over the 6,000-foot-high Valbona Pass to the village of Thethi ‒ has become a bucket list item for hiking aficionados throughout Europe. 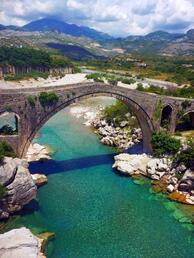 ​Shkodra: With its center of grand promenades, parks of verdant green and tree-lined pedestrian streets, Shkodra is a genteel city for walking and bicycling. But its greatest tourism asset is massive Rozafa Castle, one of the biggest castles in Europe with unequaled vistas that make you feel you’re on top of the world. There’s more than 2,000 years of history inside the walls, though most of what remains is from Venetian and Ottoman times. On a clear day, the extraordinary views in all directions are overwhelming: the confluence of three rivers snaking through a  multi-colored quilt of fields, the expanse of the Adriatic Sea, Lake Shkodra and Montenegro beyond, and distant mountains. Shkodra’s most serendipitous attraction, however, is ‘the bridge in the middle,’ the Ura e Mesit. To walk over the old stone footbridge is to step back to a time when the communities on either side of the Kiri River met and traded there. It’s also a great swimming spot: yes, the clear, glistening blue-green water that flows down from the Albanian Alps is very cold, but so refreshing in summer.
​
For more inormation, go to http://albania.al
Back to homepage