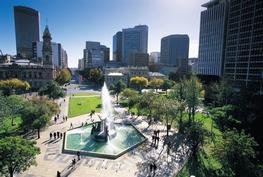 Victoria Square (c) SATC
Adelaide has been described as “effortlessly chic – and like a perfectly cellared red, it’s ready to be uncorked and sampled”.

Adelaide is known for its colonial stone architecture, expansive parklands, lively festivals and incredible sense of space. Explore the museums and libraries of North Terrace, dine on dedicated ‘eat streets’ or picnic in gardens that sprawl over almost half the city.  Go bike riding in Botanic Park or row past rose gardens in Rymill Park. Swim with dolphins or learn to sail in Glenelg or fish from the jetty in Henley.

This is a city with a great alfresco vibe, year round festivals and sporting events. It’s fringed by white sandy beaches within 20 minutes of the city centre, has 200 cellar doors within an hour’s drive and boasts over 700 restaurants, bars and nightclubs. Swimming with dolphins, playing golf, beer tasting, surfing and koala cuddling are just some of the many activities that can be done whilst based in Adelaide. Adelaide is known as the City of Festivals. A packed calendar of events includes The Adelaide Festival, WOMADelaide and The Adelaide Fringe. 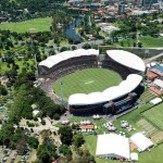 The first phase of the Adelaide Oval’s innovative redevelopment programme is nearing completion. The famed cricket grounds will be reborn as a multi-function sports and entertainment facility. There will also be a footbridge over the River Torrens linking the Adelaide Oval with the Riverbank Precinct which is undergoing its own major redevelopment including an enhanced world class Convention Centre.

The Rolling Stones were to officially open the revamped Adelaide Oval but due to recent events their Australian concerts had to be re-arranged. 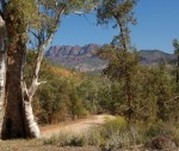 As well as being a thriving destination in its own right, Adelaide is a great base from which to explore the rest of South Australia. Just beyond the city centre you’ll find the picturesque Adelaide Hills and the world-class wineries of the Barossa Valley. From Adelaide, visitors can easily reach Kangaroo Island, The Flinders Ranges and Eyre Peninsula. The Rover, starring Robert Pattison and Guy Pearce and released in 2014, was filmed in the Flinders Ranges –  what better reason for seeing the landscape in situ.

Visitors can also embark on any number of classic self-drive journeys, travelling to Melbourne, Darwin and Perth from Adelaide; or hop on board the Ghan (to Darwin) or the Indian Pacific (to Perth or Sydney).

For more information visit http://uk.southaustralia.com
Back to Promotions home page